Feast of the Archangels

Feast of the Guardian Angels

St. Therese of the Child Jesus

St. Therese of the Child Jesus 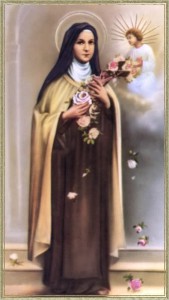 in the Calendar for the Traditional Roman Rite) 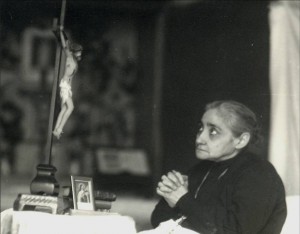 In the above picture of Luisa “The Little Daughter of the Divine Will” in prayer in front of the Crucifix is a picture of St. Therese “The Little Flower.”

(Luisa Piccarreta): – “While I was saying this, my blessed Jesus made Himself seen looking in my interior, turning everything upside down to see if there was something which He did not like. And while turning and turning, He took something like a grain of white sand in His hands, and He threw it to the ground. Then He said to me: “Dearest daughter of Mine, it is absolutely right that for one who is all for Me, I be all for her. I am too jealous that someone else might give her the slightest comfort. I alone – I Myself alone want to make up for all, and in everything. What is it that afflicts you? What do you want? I do everything to make you content. Do you see that white grain that I removed from you? It was nothing but a little bit of anxiety, for you wanted to know my Will from others. I removed it from you and I threw it on the ground so as to leave you in holy indifference – the way I want you.”

This is very similar to what the “Little Flower”, wrote in her journal called “Story of a Soul” where she writes: “Unfortunately when I have compared myself with the saints, I have always found that there is the same difference between the saints and me as there is between a mountain whose summit is lost in the clouds and a humble grain of sand trodden underfoot by passers-by. Instead of being discouraged, I told myself: God would not make me wish for something impossible and so, in spite of my littleness, I can aim at being a saint. It is impossible for me to grow bigger, so I put up with myself as I am, with all my countless faults. But I will look for some means of going to heaven by a little way which is very short and very straight, a little way that is quite new.

It was also in 1910, while visiting the Trani Diocese to establish an orphanage, Father Hannibal Di Francia met Luisa Piccarreta for the first time, most likely at the suggestion of her confessor, Fr. Gennaro Di Gennaro. Soon thereafter, Father Hannibal found himself at the center of a loose association of priests who shared a common thirst for holiness and a deep admiration for Luisa. Members of the group included Father Gennaro Braccale, S.J.; Father Eustacchio Montemuro, founder of the Sisters of the Divine Side; and Father Ferdinando Cento, who later became a cardinal.

From the Divine Will Newsletter No. 149

Permanent link to this article: https://bookofheaven.org/2014/10/01/st-therese-of-the-child-jesus-2/