The (Human) will of the Soul as a Christmas Gift for Baby Jesus. 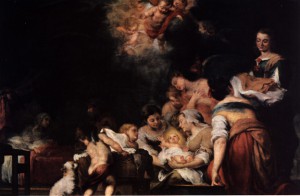 “My daughter, as My Humanity was conceived, so I began a new creation, in order to lay the Kingdom of My Will over all the Acts that My Humanity did. All the Acts I did, both inside and outside of My Humanity, were animated by a Divine Will that contained the Creative Power; therefore My Acts underwent the new creation and converted into Acts of Divine Will, and I extended Its Kingdom in My interior and in all of My external Acts. In fact, who destroyed and rejected this Kingdom of My Will in man? His human will, that, rejecting Mine from itself, did not let itself be dominated and animated by It, but let itself be dominated and animated by its own, and so it formed in it the kingdom of miseries, of passions and of ruins.

“Now, before anything, My Humanity was to redo and to call back this Kingdom of the Supreme Will within Myself, within My human nature, that I might be all set to form the Redemption, and therefore able to give mankind the remedies in order to be saved. Had I not placed this Kingdom in safety within Me, had I not given to It Its rights of dominion, I could not have formed the good of Redemption. My Divine Will would have been inexorable in not conceding Its goods to Me, had I not had the prime right to form Its Kingdom in Me; only then, as second act, It would grant to Me the remedies to save creatures.

“So, My Supreme Will lined Itself up within all of My Acts; It dominated, and, triumphant, It invested My tears, My baby moans, My sighs, heartbeats, steps, works, words, pains—in sum, everything, with Its Creative Power. And as It invested them, It pearled them with Its endless light, and formed the new creation of Its Kingdom in all My Acts. Therefore, in every additional thing I did, the Divine Fiat expanded the boundaries of Its Kingdom within My Humanity.

“Now, if the Creation was called from nothing, and was formed on the foundation of My creative word, that spoke and created, it commanded, and all things took their place of order and harmony, in the creation of the Kingdom of the Supreme Will, instead, It was not content with forming It from nothing, but It wanted, as guarantee of safety, the basis, the foundations, the walls and all the acts and pains of My Most Holy Humanity, in order to form the creation of Its Kingdom.

“See then, how much this Kingdom of My Will cost; with how much love I developed It within Me. Therefore, this Kingdom exists—there is nothing left but to make It known, so as to let all the goods It contains go out into the field. So, what I want from you is that, just as My Humanity left My Will free to form Its Kingdom, you may leave Me free, without opposing in anything, so that, finding no opposition in you, My Acts may flow in you, and taking their place of honor, they may line up, all in order, to continue in you the life of the Kingdom of My Will.”

Permanent link to this article: https://bookofheaven.org/2014/12/29/how-the-new-creation-of-the-kingdom-of-the-supreme-will-was-formed-in-the-humanity-of-our-lord/