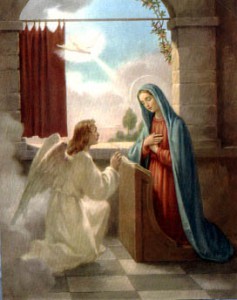 March 25 liturgically commemorates the ‘FIAT’ of a young woman which would forever change the world. Her consent permitted God the Father, in the order of human freedom, to bring us our Redeemer.

One hundred years ago, on March 25, 1915, the renowned Belgian cardinal and World War I hero, Desire` Cardinal Mercier, began a petition movement in the Catholic Church for the solemn definition of the Blessed Virgin Mary as the “Spiritual Mother” of all humanity.

Mercier’s reasons were simple.  If the pope were to infallibly define that Mary is the world’s Spiritual Mother, then torrents of grace, to a historic proportion, would rain down upon the Church.  Why?  Because, historically, every dogmatic definition of a Marian truth has brought down great and extraordinary graces upon the Church and the world.

For example, after defining the first Marian dogma that Mary is the “Mother of God,” devotion to Our Lady exploded in both the East and West, with ubiquitous expressions of Marian love manifest in liturgy, theology, art, icons, architecture, liturgy, poetry, and most every other form of western culture.

Before the defining of the third Marian dogma, the Immaculate Conception, the Church in general and the pope in particular were in grave crisis.  Pius IX had been driven out of the Vatican by invading troops from the south, and the Papal States were overrun.  While in exile at Gaeta, Pius IX was requested by several pleading cardinals to define the Immaculate Conception precisely as a remedy for the grave state of the papacy and of the Church.  The Marian cardinals argued that if Our Lady’s doctrine was declared as a dogma, she would directly intercede to save both the papacy and the current dismal state of the Church.  The saintly pontiff consented.

Thus from exile in 1849, Bl. Pius IX wrote to the bishops of the world, informing them of his intention to define the Immaculate Conception as a dogma. After doing so on December 8, 1854, not only did the Church experience a tremendous grace of unity and solidarity under the Chair of Peter, but the returning pontiff soon after declared the dogma of papal infallibility, which further solidified Catholic faith and life under the Holy Father.

The definition of Mary’s Spiritual Motherhood ( it had been argued by Mercier and could still be argued today), would unleash upon the Church even more graces, since this proposed dogma would be to define the very roles in which Mary acts as a “Mother to us in the Order of Grace” (Lumen Gentium, n. 61).

Mary’s titles are her functions. As St. John Paul II noted, “She acts as a Mediatrix, not as an outsider, but in Her position as Mother” and “she has the Right to do so” (Redemptoris  Mater, n. 21).

If our Holy Father were to define Mary’s Spiritual Motherhood, it would allow Her the fullest possible exercise of Her Motherly roles on our behalf.  Only when human free will consents to Mary’s titles, can her function as “Spiritual Mother” be fully activated.  As St. Augustine reminds us, God created us without us, but he will not save us without us.”

God needs our consent to save us, and Mary needs our consent to be fully activate Her titles by more completely mediating the infinite graces of Jesus into today’s troubled human drama. The pope’s “yes” to Mary’s spiritual Motherhood in the form of a dogma would be not only the pope’s, but in virtue of his universal office, a “fiat” on the part of all humanity, for Mary’s full blown intercession for the contemporary world.

Mary’s FIAT “freed the Father, in the order of human freedom, to bring us our Redeemer.  Now Mary awaits our fiat, in the

person and office of the Holy Father, in the order of human freedom, to bring inestimable grace to the world, including the graces necessary for world peace.

One observer to this now one hundred year movement commented, “Why not? What could we lose by defining what the Church already teaches about Mary?”  Another observer added, “If it’s true, then why not declare it, especially if it’s a truth about Mary?” I heartily agree with both.

By 1918, Cardinal Mercier had gathered over 300 bishop petitions and thousands upon thousands of petitions from clergy and faithful to the Holy Father for this fifth Marian dogma. Since these initial petitions inspired by Mercier, over 7 million petitions and over 550  cardinals and bishops have petitioned the popes for the dogma of Mary’s Spiritual Motherhood.

Why petitions? Because it’s the Catholic way.  Both Pius IX and Pius XII thanked the millions of Christian faithful who had petitioned them for their respective dogmatic proclamations of the Immaculate Conception and Assumption.  Canon Law actually encourages the faithful to bring to the attention of the Pastors of the Church issues they deem important for the Church’s good.

We are free to do the same.  If you agree with Cardinal Mercier, hundreds of Catholic bishops, millions of Catholic faithful, and people like Blessed Teresa of Calcutta, Mother Angelica, and other Catholic leaders and faithful worldwide—that to define Mary as Spiritual Mother of all humanity would bring great graces to the Church—then you can exercise your own Catholic privilege to let the Holy Father know.

You are certainly free to petition Pope Francis—a great lover of Our Lady, and one not shy in communicating with his flock—about your perspective regarding defining Mary’s Spiritual Motherhood.  With an envelope, three postage stamps, and 5 minutes, you can jot down a quick note to Pope Francis, if you would like to offer him your own personal fiat for the dogma of Mary’s Motherhood.  Here’s the Pope’s address:

Professor of Theology and Mariology

Permanent link to this article: https://bookofheaven.org/2015/03/25/a-fiat-to-the-fiat-defining-marys-motherhood/