All Must Aspire to a Kingdom 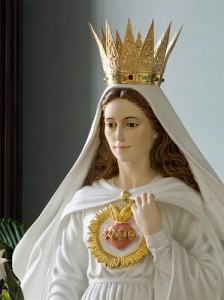 Towards evening of February 11, I heard these words addressed to me by Our Lady:
“I am the Mother of the sacred humanity, and it is my special work as Co-Redemptrix of the human race to help souls reach the Sanctity of the Father in Eternal Union by showing them how to put on Christ, to imbibe His Spirit, and thus become one with Him.”
________________________

I am informed that tomorrow, the Friday before Palm Sunday, is a traditional Feast of Our Lady, Co-Redemptrix, in connection with Her sorrowful witness at The Crucifixion, one title which She used to identify Herself to Sister Mary Ephrem, C.Pp.S.  (Mildred Neuzil).

V17 – 5.1.25 – “In addition to Myself, there is My Celestial Mama, Who was given the Unique Mission of Mother of a Son-God, and the office of Co-Redemptrix of mankind. For Her mission of Divine Maternity, She was Enriched with so much Grace, that all that belongs to the other creatures, both Celestial and terrestrial, United all together, will never be able to equal Her. But this was not enough to Draw the Word into Her Maternal Womb; She Embraced all creatures, She Loved, Repaired, Adored the Supreme Majesty for all, in such a way as to accomplish, Herself alone, all that the human generations owed God. So, in Her Virginal Heart She had an Inexhaustible Vein toward God and toward all creatures. When the Divinity found in this Virgin the Requital of the Love of all, It felt Enraptured, and Formed in Her Its Conception. And as She Conceived Me, She took on the Office of Co-Redemptrix, and She took part in, and Embraced Together with Me, all the pains, the satisfactions, the reparations, the Maternal Love toward all. So, in the Heart of My Mother there was a fiber of Maternal Love toward each creature. This is why, when I was on the Cross, in Truth and with Justice I Declared Her the Mother of all. She ran together with Me in the Love, in the Pains – in Everything; She Never left Me alone. If the Eternal One had not placed so much Grace in Her as to be able to receive the Love of all from Her alone, He would never have moved from Heaven to come upon earth to Redeem mankind. Here is the necessity, the befittingness, that, having the Mission of Mother of the Word, She Embrace and Surpass Everything.”

V17 – 5.4.25 – “…Just as in Heaven there are the Father, the Son and the Holy Spirit, inseparable from One Another but distinct among Themselves, forming the whole beatitude of Heaven; in the same way, on earth there will be three persons who, because of their Missions, will be distinct and inseparable among themselves: the Virgin, with Her Maternity which veils the Paternity of the Celestial Father and encloses His power in order to fulfill Her mission of Mother of the Eternal Word and Co-Redemptrix of mankind; my Humanity, for the mission of Redeemer, which enclosed the Divinity, and the Word, without ever separating from the Father and from the Holy Spirit, manifested my celestial wisdom – adding the bond of rendering Myself inseparable from my Mama; and you (Luisa), for the Mission of My Divine Will, as the Holy Spirit will make display of His Love, manifesting to you the Secrets, the Prodigies of My Divine Will, the Goods It contains, to make Happy those who will give themselves to knowing how much good this Supreme Will Contains, to Love It and to let It Reign in their midst, offering their souls to let It dwell within their hearts, that It may be able to form Its Life in them – adding the bond of inseparability between you, the Mother and the Eternal Word.

TWENTY FOURTH HOUR OF THE PASSION OF CHRIST

“O Cross, how could You be so cruel with my Son? Ah, You have spared Him nothing! What wrong had He done to You? You have not permitted Me, His sorrowful Mama, to give Him even a sip of water, while He was asking for it; and to His parched mouth You gave gall and vinegar!  I felt my pierced Heart melt, and I wanted to offer It to His lips to quench His thirst, but I had the sorrow of seeing Myself rejected. O Cross, cruel, yes, but holy, because divinized and sanctified by contact with my Son! Turn that cruelty which You used with Him into compassion for miserable mortals; and for the sake of the pains He suffered on You, Impetrate grace and strength for the souls who suffer, so that not one of them may be lost because of tribulations and crosses. Souls cost Me too much – they cost Me the life of a Son God; and as Co-Redemptrix and Mother, I bind them to You, O Cross.” And after kissing It over and over again, You leave.”

Permanent link to this article: https://bookofheaven.org/2015/03/26/mary-mother-of-the-eternal-word-and-co-redemptrix-of-mankind/