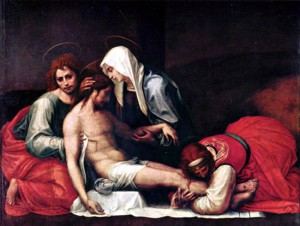 Lesson of the Desolate Queen and Mother:

Now, listen to Me, child of my sorrows. As my dear Son breathed His last, He descended into Limbo, triumpher and bearer of glory and happiness to that prison in which were all the Patriarchs and the Prophets, the first father Adam, dear Saint Joseph, my holy parents, and all those who had been saved by virtue of the foreseen merits of the future Redeemer. I was inseparable from my Son, and not even death could take Him away from Me. So, in the ardor of my sorrows I followed Him into Limbo, and was spectator of the feast and of the thanksgivings which that whole great crowd of people gave to my Son, who had suffered so much, and whose first step had been toward them, to beatify them and to bring them with Himself into celestial glory. So, as He died, conquests and glory began for Jesus and for all those who loved Him. This, dear child, is symbol of how, as the creature makes her will die through union with the Divine Will, conquests of divine order, glory and joy begin – even in the midst of the greatest sorrows.

Permanent link to this article: https://bookofheaven.org/2015/04/04/holy-saturday/