The Bread of Knowledge of the Divine Will 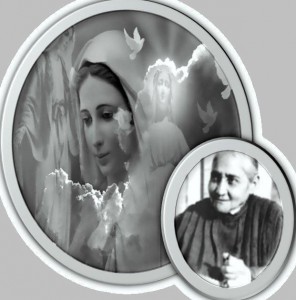 Paragraph 1991 – I. Justification… With justification, faith, hope, and charity are poured into our hearts,
and obedience to the Divine Will is granted us. ( 1812 )- CCC

V2 – 9.19.99 – He (Jesus) showed me His Heart, which contained three distinct globes of light, which then formed a single one. And Jesus, resuming His speech, told me: “The globes of light which you see in my Heart are the Faith, the Hope and the Charity which I brought upon earth to make suffering man happy by offering them to him as gift. Now, to you also I want to give a more special gift.” And while He was saying this, many threads of light came out of those globes of light, which inundated my soul like a sort of net, and I remained inside of it. And Jesus: “Here is how I want you to occupy your soul. First, fly upon the wings of Faith, and in that light, by plunging yourself into it, you will know and acquire ever more news about Me, your God; but by knowing Me more, your nothingness will feel almost dissolved, and you will have no place to lean on. You, however, rise more, and dive into the immense sea of Hope, which is made of all my merits that I acquired in the course of my mortal life, and of all the pains of my Passion, which I also gave to man as gift. Only through these can you hope for the immense goods of Faith, because there is no other way to obtain them. So, as you avail yourself of these merits of mine as if they were your own, your ‘nothing’ will no longer feel dissolved and sinking into the abyss of nothingness, but acquiring new life, it will be embellished and enriched, in such a way as to draw the very divine gazes upon itself. Then the soul will no longer be timid, but Hope will administer to her courage and strength, in such a way as to render her stable like a pillar exposed to all the intemperances of the air, which are the various tribulations of life, and which do not move her a tiny bit. And Hope will cause the soul not only to immerse herself without fear into the immense riches of Faith, but to make herself the owner of them; and through Hope she will reach such a point as to make God Himself her own. Ah, yes! Hope makes the soul reach wherever she wants; Hope is the door of Heaven – only by means of It can it be opened, because one who hopes for everything, obtains everything. Then, after the soul has reached the point of making God Himself her own, immediately, without any obstacle, she will find herself in the immense ocean of Charity, and carrying Faith and Hope with her, she will immerse herself in it and will form one single thing with Me, her God.”

Most loving Jesus continued: “If Faith is the king, Charity is queen, and Hope is like the peacemaking mother who pacifies everything. In fact, with Faith and Charity there may be disturbance, but Hope, being bond of peace, converts everything into peace. Hope is support, Hope is refreshment; and when the soul, rising by means of Faith, sees the beauty, the sanctity and the love with which she is loved by God, and feels drawn to love Him, but in seeing her insufficiency, how little she does for God, and how she should love Him but does not, she feels discomforted, disturbed and almost does not dare to draw near God – immediately this peacemaking mother comes out, and placing herself between Faith and Charity, she begins to perform her office of peacemaker. She makes the soul peaceful again, she pushes her, raises her, gives her new strengths; and carrying her before king Faith and queen Charity, she excuses the soul, she places a new effusion of her merits before the soul, and she prays them to receive her. And Faith and Charity, with their gazes fixed only on this peacemaking mother, so tender and compassionate, receive the soul, and God forms the delight of the soul, and the soul the delight of God.”

Oh, holy Hope, how admirable you are! I imagine seeing the soul who is possessed by this beautiful Hope, like a noble wayfarer, who walks in order to go and take possession of a land that will make his whole fortune. But since he is unknown and he journeys through lands which are not his, some deride him, some insult him, some strip him of his clothes, and some reach the point of beating him and even of threatening to kill him. And the noble wayfarer – what does he do in all these trials? Will he be disturbed? Ah, no – never! On the contrary, he will deride those who do all this to him, and knowing with certainty that the more he suffers, the more he will be honored and glorified when he comes to take possession of his land, he himself teases the people into tormenting him more. But he is always tranquil, he enjoys the most perfect peace; and what is more, while in the midst of these insults, he remains so calm, that while the others are all alert around him, he keeps sleeping in the bosom of his longed-for God. Who administers so much peace and so much firmness to this wayfarer in continuing the journey he has undertaken? Certainly Hope in the eternal goods that will be his; and since they are his, he will surpass everything in order to take possession of them. Now, by thinking that they are his own, he comes to love them – and here is how Hope gives rise to Charity.

Who can say, then, what the light of blessed Jesus makes me see? I would rather have let it pass in silence, but I see that lady obedience, laying down her friendly guises of friendship, assumes the aspect of a warrior and is arming his weapons to wage war against me and to wound me. O please! Do not arm yourself so quickly – lay down your claws, be quiet, for I will do as you say, as much as I can, and so we will always remain friends.

Now, when the soul carries herself into the most extensive sea of Charity, she experiences ineffable delights, and enjoys joys which are unspeakable to mortal soul. Everything is love; her sighs, her heartbeats, her thoughts, are as many sonorous voices that she makes resound around her most loving God. These voices are all of love, calling Him to themselves, in such a way that blessed God, drawn and wounded by these loving voices, requites them, and it happens that His sighs, His heartbeats, and all of the Divine Being continuously call the soul to God.

Who can say, then, how wounded the soul is by these voices; how she begins to rave as though taken by a most ardent fever; how she runs, almost made insane, and goes to plunge herself into the loving Heart of her Beloved to find refreshment, and how she suckles, in torrents, the divine delights? She becomes inebriated with love, and in her inebriation, she makes canticles, all of love, for her most sweet Spouse. But who can say everything that passes between the soul and God? Who can speak about this Charity, which is God Himself?

At this moment, I see an immense light, and my mind remains stupefied; it applies itself now at one point, now at another, and I try to write it on paper, but I feel I stammer in expressing it. So, not knowing what to do, for now I keep silent, and I believe that lady obedience will forgive me this time, because if she wants to get huffy with me, this time she is not so right. The wrong is all hers, for not giving me a more fluent tongue to be able to express it. Have you understood, most reverend obedience? We remain at peace, don’t we?

1 Corinthians 13:13 – And now there remain faith, hope, and charity, these three: but the greatest of these is charity.

1 Thessalonions1:3 – Being mindful of the work of your faith, and labour, and charity, and of the enduring of the hope of our Lord Jesus Christ before God and our Father:

1 Thessalonions 5:8 – But let us, who are of the day, be sober, having on the breastplate of faith and charity, and for a helmet the hope of salvation.

Permanent link to this article: https://bookofheaven.org/2015/09/25/faith-hope-charity/