OUR GOD IS GENEROUS, WE MUST BE GENEROUS WITH HIM

The Word Made Flesh, the Son of the Father, Formed the New Graft with the Tree of Humanity 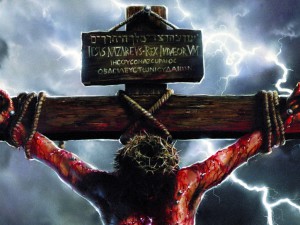 V27 – 10.27.29 – “Before My coming upon earth, God and the creature were with each other like the earth and the sun: the earth does not possess the seed with which, by pulverizing it, it may form the shoot in order to form the plant of that seed; the sun, not finding the shoot, cannot communicate the effects it possesses so as to be able to form, with its vivifying virtue, the development and the formation of that plant. So, earth and sun are as though foreign to each other; it can be said, if they had reason, that they would as though scowl at each other, for the earth cannot produce and receive that good, and the sun cannot give it.

“Such was the state of humanity without the seed of My Fiat, and if there is no seed it is useless to hope for the plant. Now, with My coming upon earth, the Divine Word clothed Himself with human flesh and, by this, He formed the graft with the tree of humanity. My Humanity lent Itself as seed to the Eternal Word, and My Divine Will formed the new graft with My human will. From this, since I was the head of all human generations, began the right on both sides, human and Divine—for them, to be able to receive the Kingdom of My Divine Will; for God, to be able to give It.

“Now, when a graft is made, it does not immediately assimilate the strength of the new humors, but it keeps assimilating the new humors of that graft little by little; therefore, at the very beginning it gives few fruits, but as it keeps forming, the fruits increase, they are bigger and more tasty, until the whole tree is formed, loaded with branches and fruits. Such is the graft made by Me with the tree of humanity. About two thousand years have passed, and humanity has not received all the humors of My graft; but there is reason to hope, because the seed, the graft, is there, and therefore the creature can ask for it. God finds Himself in the possibility of giving it, because there is My Humanity that, possessing My Divine Will by nature by virtue of the Word made flesh, has given back the rights to man and to God. Therefore, everything I did in Redemption is nothing other than preparation, watering, cultivation, to give development to this celestial graft made by Me between the two wills, the human and the Divine.

V35 – 12.25.37 – “My blessed daughter, in My descent upon earth the Wonders—the ardor of Our Love—were so Great and so many that neither Angels nor creatures can understand all that Our Divinity Operated in the Mystery of My Incarnation. You Must Know that Our Supreme Being possesses Its Incessant Motion by nature. If this Motion could cease, even for an instant—which cannot be—all things would remain paralyzed and with no life, because all things—the life, the preservation and all that exists in Heaven and on earth—everything—depends on that Motion. Therefore, in descending from Heaven to earth, I, Word and Son of the Father, departed from Our Primary Motion; I mean—remaining, I left. The Father and the Holy Spirit descended with Me—They were concurrent (neither did I do any Act if not together with Them), and they still remained on the Throne—Full of Majesty, in the Celestial Regions.

“So, as I left, My Immensity, My Love and My Power descended together with Me; and My Love—which is incredible and is not satisfied if It doesn’t form, from My Life, a Life for each existing creature—not only did this, but It formed My Life everywhere and in every place—multiplying It. Keeping My Immensity in Its Power, My Love filled It with many of My Lives, so that everyone could have a Life of Mine for himself, and the Divinity could have the Glory and the Honor of a Divine Life for as many things and creatures as We delivered to daylight. Ah! Our Love repaid Us for the Work of Creation. And by forming many of Our Lives, It not only repaid Us, but It gave Us even more than We had done. Our Divinity remained Enraptured, and felt a sweet Enchantment in seeing the devices and stratagems of Our Love—in seeing so many of Our Lives being spread out, since Our Love used Our own Immensity as the circle in which to place them. Therefore, while My Life was the center, My Immensity and Power were the circumference in which these Innumerable Lives were being deposited. These Lives could find everything and everyone, and offered Themselves to Love Us and to be Loved.”

ROMANS 1:3 – [1] Paul, a servant of Jesus Christ, called to be an apostle, separated unto the gospel of God, [2] Which he had promised before, by his prophets, in the holy scriptures, [3] Concerning his Son, who was made to him of the seed of David, according to the flesh, [4] Who was predestinated the Son of God in power, according to the spirit of sanctification, by the resurrection of our Lord Jesus Christ from the dead; [5] By whom we have received grace and apostleship for obedience to the faith, in all nations, for his name;

JOHN 1:14 – And the Word was made flesh, and dwelt among us, (and we saw his glory, the glory as it were of the only begotten of the Father,) full of grace and truth.

Permanent link to this article: https://bookofheaven.org/2015/10/17/the-word-made-flesh-the-son-of-the-father-formed-the-new-graft-with-the-tree-of-humanity/