Mary, Mediatrix of All Graces – June 8

Mary Mediatrix of All Graces (Trad) 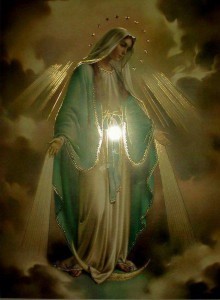 “…a fifth Dogma awaits to be proclaimed by the Church, one which has been prophesied by many Marian Saints. This Dogma is Mary, Mediatrix of All Graces. A lay movement called Vox Populi Mariae Mediatrici has been actively promoting the proclamation of this doctrine.  Inside the Vatican magazine reports that “currently it has collected from all around the world more than 4 million signatures, including more than 300 bishops. There are 32 cardinals on its advisory board….” Dr. Mark Miravalle, Associate Professor of Theology and Mariology at the Franciscan University of Steubenville, has authored a book entitled, Mary: Co-Redemptrix, Mediatrix. Advocate in which he proposes the Dogmatic definition of Mary, Co-Redemptrix, Mediatrix and Advocate. Cardinal Luigi Ciappi, O.P., who served as Papal Theologian for all popes from Pope Pius XII to Pope John Paul II, endorsed this work with the words, “I share the hope of Dr. Mark Miravalle.”

by Dr. Mark Miravalle and Richard L Russell on September 24, 2013

Mary is the mediatrix for humanity who spiritually nourishes her earthly children by dispensing the graces of salvation.  At the Wedding of Cana, Mary interceded to bring the graces of Jesus to all of humanity.  She “mediated” or interceded to bring Jesus himself, the source of all graces, into the world.  Mary too was appointed by Jesus himself at the climax of his redeeming sacrifice on the cross to become the spiritual mother of all peoples and to dispense to humanity heavenly graces when he said to Mary, “Behold, your son.”  Jesus then told John, and all those who seek to become beloved disciples of Jesus, to “behold your Mother.”  For these roles in dispensing the saving graces of Jesus to her earthly children, Mary is called the “mediatrix of all graces.”  As Bl. John Paul II explained, “mediatrix is implicit in the term, mother.”  The papal Magisterium of the last two centuries has consistently taught this Marian role as mediatrix of all graces, and Pope Benedict XVI Emeritus published this same title on 11 February 2013, the day he announced his resignation.

Permanent link to this article: https://bookofheaven.org/2020/06/08/mary-mediatrix-of-all-graces-june-8/