July 3 A.D. 1963 – The Transfer of the Mortal Remains of The Servant of God, Luisa Piccarreta

July 3 A.D. 1963 – The Transfer of the Mortal Remains of
The Servant of God, Luisa Piccarreta 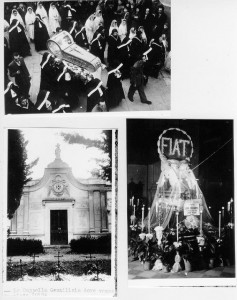 Calvi Family Chapel Transfer to Santa Maria Greca
A chosen soul, a seraphic bride of Christ, humble and devout, whom God had endowed with extraordinary gifts, an
innocent victim, a lightening conductor of Divine Justice, bedridden for sixty-two years without interruption, she was a
herald of the Kingdom of the Divine Will.
Luisa died at the age of eighty-one years, ten months and nine days, on March 4, 1947, after a fortnight of illness, the only
one diagnosed in her life, a bad attack of pneumonia. She died at the end of the night, at the same hour when every day the
priest’s blessing had freed her from her state of rigidity. Archbishop Francesco Petronelli (May 25 A.D. 1939-June 16
A.D.1947) archbishop at the time.
For four days her mortal remains were exposed for the veneration of an immense throng of the faithful who went to her
house to have a last look at Luisa the Saint, so dear to their hearts. The funeral was a realm triumph; Luisa passed like a
queen, borne aloft on shoulders among the lines of people. All the clergy, secular and religious, accompanied Luisa’s
body. The funeral liturgy took place in the main church with the participation of the entire chapter. In the afternoon, Luisa
was buried in the family Chapel of the Calvi family.
July 3 A.D.1963 – Her mortal remains were definitively laid to rest in Santa Maria Greca.
5

Permanent link to this article: https://bookofheaven.org/2014/07/03/july-3-a-d-1963-the-transfer-of-the-mortal-remains-of-the-servant-of-god-luisa-piccarreta/